Bodrum - the most party resort in Turkey, the capital of nightlife throughout the country with a record density of bars, nightclubs, restaurants and discos per square kilometer. In the 14 bays of the peninsula are located villages and hotels, and the eponymous city was built in its very center. This, unlike most other Turkish resorts, is mostly not German fans going to lie on the beaches, but more active French, Scandinavians and the British.

The current Bodrum stands on the site of the ancient city of Halicarnassus, where the famous Halicarnassus Mausoleum (353 BC) was located, one of the seven wonders of the world. Alas, in the Middle Ages the miracle was destroyed by earthquakes, and the remains today can only be seen in the British Museum in London. Nevertheless, in Bodrum something of the glorious ancient heritage has been preserved, and the centuries-old evidence of ancient civilizations in the Old City peacefully coexist here with fashion and modernity.

Bodrum consists of two parts. The eastern half - with a long, narrow, but comfortable beach, artificially created for the development of tourism. Behind the beach are all kinds of bars, restaurants and clubs. Life in the second half, western, is quieter and concentrated around the marina and the yacht club. Here are more expensive supermarkets and restaurants.

Thanks to the frequent winds, this resort is also a good place for fans of surfing and other water sports. 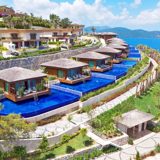 The Bodrum By Paramount Hotels & Resorts

The Bodrum By Paramount Hotels & Resorts is located 26 km from Milas Bodrum Airport, 208 km from Izmir Airport, 192 km from Dalaman Airport, 10 km from the center of Bodrum, 2 km from the village of Torba, on the seashore. The hotel was built in 2013, the total area of ​​110,000 m2. The hotel consists of single-storey buildings and 55 villas. 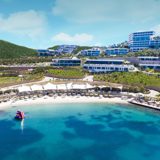 The modern and unique LUX * style can now be found on the coast of the Turkish Riviera. Located on an exclusive private peninsula and nestled among landscaped gardens, this hotel offers state-of-the-art design, legendary LUX * service and panoramic sea views. 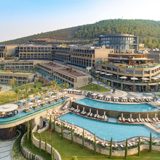 Hotel Lujo Bodrum, with its minimalist architectural style, natural colors and impressive views of the Aegean Sea, combines comfort and luxury with such delicate balance and artistic rigor that deliver more pleasure than a masterpiece can offer.