Меню
PICK UP YOUR TOUR?
Main \ Mountain tours \ May Alpiniad in Chimgan Mountains

May Alpiniad in Chimgan Mountains

At that time, hundreds of athletes from all over the Soviet Union gathered at the Chimgan alpine, and thanks to the work of Sukharev-Nikitin, the resounding names of popular recreation places in the mountains of Uzbekistan were heard throughout the country. Many still remember the words from the song about Chimgan and Golden Brichmulla.

And although much has changed since then, for example, lovers of active recreation in the post-Soviet space are now accessible to the mountains of faraway countries - but from this the mountains of Uzbekistan have not become less beautiful.

Chimgan is well known as a “cradle” for many, many athletes. The variety of routes of various difficulty categories (from 1B to 4B) attracts young climbers and mature athletes to Chimgan, because here you can make all the necessary ascents up to the second level of mountaineering, and most of the ascents (except for participant 5A) for 1 discharge.

Climbing along some climbing routes (for example: 1B along the Western ridge, “Zayachie ushi”, “Utyug”, Zhukov Route, etc.) are possible within one day. Of course, it is better to arrive in advance for acclimatization. Other routes take time to approach. Some prefer to go through three peaks of Chimgan-Kichkina (Chilanzarchouki) - Hunting peak (Aukashka) along traverse 3A.

For tourists in the Chimgan area there are many one-day and multi-day routes. Among the most visited sites of interest of tourists, let's call the famous Pulatkhan, Karaarchu, Aukashka. It is also impossible to ignore the Gulkamsky gorge, and the Black Waterfall, the Marble River, the Aksai Gorge and the amazingly beautiful alpine passes of Utra-Kumbel, Kumbel, Takhta and others. 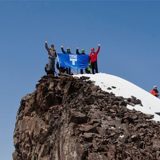 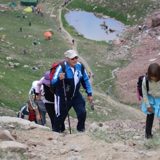 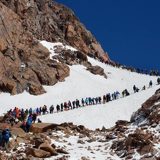 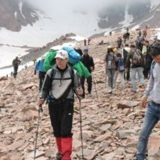