Меню
PICK UP YOUR TOUR?
Main \ Hot tours \ Unforgettable tours in the mountains of Chimgan, Charvak

Unforgettable tours in the mountains of Chimgan, Charvak 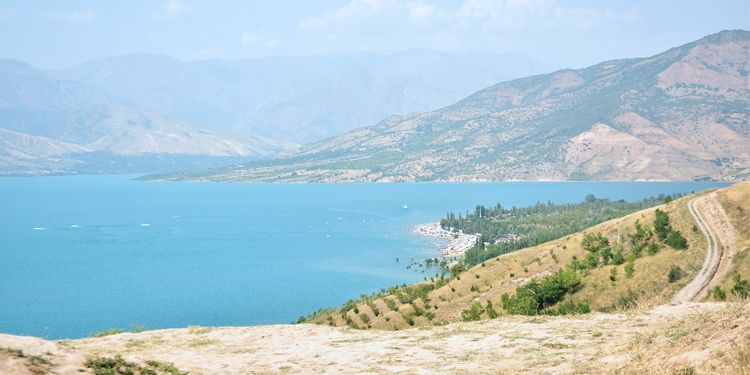 Charvak: an artificial lake in the mountains of Uzbekistan.

This Pearl of the Western Tien Shan appeared quite recently, in 1970. It was then that a stone dam was built with a height of 168 meters, behind which, at the confluence of the Pskem, Koksu and Chatkal rivers, a beautiful mountain lake was formed - Charvak reservoir - whose blue water on hot summer days beckons to it.

Once here, on the site of the present bottom, there were settlements, burial mounds, evidence of the sites of primitive man, petroglyphs and other historical monuments. However, after the devastating earthquake of 1966, when Tashkent was being restored by the forces of the whole USSR, there was an acute shortage of cheap and environmentally clean electricity, and it was decided to create Charvak State District Power Plant (there was simply no better place). Archaeologists and historians have conducted a preliminary study of all objects, photographed and recorded more than 150 monuments of history of this region. Now, 40 years later, most of these attractions disappeared under a layer of mud and silt.

Remote 60 km. from Tashkent, Charvak reservoir, often simply called Charvak, is the most popular holiday destination among local residents. The coastline of the reservoir is almost 100 km., And at half of this length there are many recreation areas, boarding houses and children's camps. The most comfortable here is the “Charvak Oromgohi” complex, where you can sunbathe on the sandy beach or take a ride on a boat, scooter. However, you can have a great time swimming near the shore, in places like Yusupkhana and Brichmulla. It offers a beautiful view of the peaks of the Bolshoi and Maly Chimgan, and other rocky mountains, which are also popular tourist sites among residents and guests of the capital.

One of the small, but interesting sights of the Charvak reservoir is the village of Bogistan. Two great figures of the East were born here: Sheikh Hovendi at-Takhur (Sheihantaur), as well as his distant relative Ubaidullah Akhror, widely known in the world as a great Sufi. By the way, before reaching the dam, near the town of Khodzhikent there is a teahouse, in which a 600-year-old plane tree grows, and nearby there are rock paintings of a primitive person. 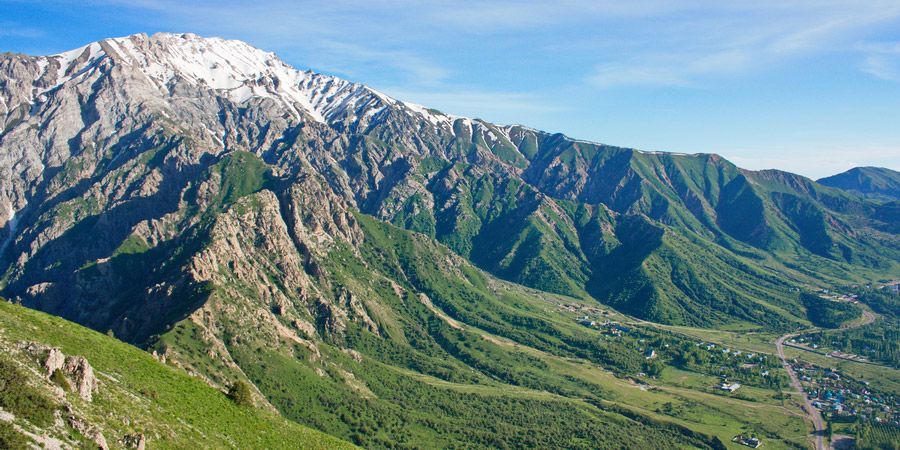 Chimgan: rest in the mountains

80 km. Tashkent is the most charming corner of nature - a favorite resting place for guests and residents of the capital - Chimgan.
Chimgan is a popular recreation area, a ski resort in the Chimgan mountains - the spurs of the Tien Shan, an extensive mountain range stretching throughout Central Asia.

Chimgan Valley is located at an altitude of 1200-1600 m. Above sea level and is surrounded on all sides by mountains. Above the whole valley rises the mountain - Big Chimgan (3309 m.), Which is a spur of the Chatkal ridge. Such picturesque places as Gulkam, Beldersay and many others also belong to the Chimgan mountains. For its unique beauty and health properties, Chimgan is rightfully called “Uzbek Switzerland”. The slopes of the mountains are covered with relic juniper forests. The mountains and hills are cut by swift mountain streams. They are here simply called sai. By the way, in the Chimgan small rivers there is always abundant variety of fish that attracts lovers of fishing here.

And how picturesque are the islands of alpine meadows, covered with poppies and medicinal herbs! Fresh, clean air with the finest aroma of countless herbs and flowers (the word "chimgan" - "chim eon" - can be translated as "green, soft grass"). There are small lakes between the rocks, fast rivers and waterfalls rustle. In the mountain cliffs are hidden mysterious caves. On the steep walls you can even find petroglyphs - ancient rock paintings of animals and hunters.

The mild climate and a large selection of slopes for skiing and downhill skiing create excellent conditions for alpine skiing. The ski season in Chimgan lasts from December to March, because the ski slopes are located on the northern slopes of the majestic mountains.

In addition, here you can ride not only on skis, but also on snowboards, snowmobiles, ice skating and sledding, to work out freeride.

In the hotels there is a rental shop for tourist equipment and equipment, a ski lift and a cable car are laid to the ski track.

And in the spring and summer Chimgan becomes the center of mountain tourism. It is possible in search of adventures to make light ascents on picturesque hills or to conquer Big Chimgan, the snowfield of which remains to lie even in summer, to fly paragliders, ride horses. Routes run through flowering gardens among apple trees, cherry plums and hawthorn. In the gorges there are rivers with numerous waterfalls and rapids. Glance travelers appear underground halls decorated with stalactites and stalagmites of the most fantastic forms.

People come here, both for a short period of time in order to recover from the weekdays of the working week, and for a long period to have a good time in a friendly company. Everyone will find something for everyone here. Chimgan is waiting for his guests at any time of the year. 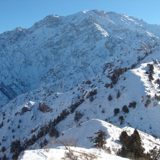 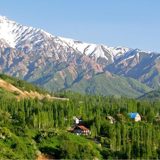 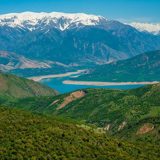 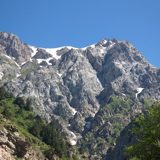 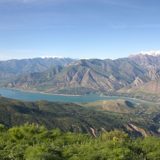 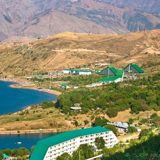 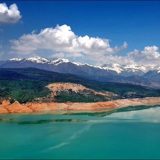 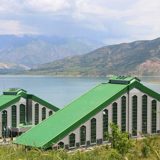